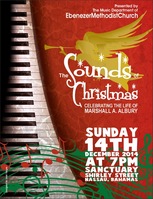 On , December 14, 2014 at 7pm, the Ebenezer Music Department delivered their annual concert in the church Sanctuary.  "It was the best one yet" has been the statement from those who attended. The Music Department presented The Sounds of Christmas - a collection of beautiful arrangements for choir and orchestra. Under the direction of Music Director, Barry Newbold, the music department touched many hearts through the songs and musical items. This year we dedicated our concert to Mr. Marshall Albury, who lived and loved music, especially during Christmas.

THE NIGHT SHIFT BEFORE CHRISTMAS
﻿ 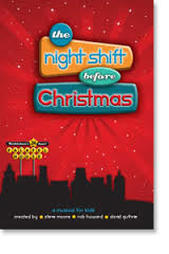 On December 14 at 11:00 a.m. the youth department shared the musical "The Night Shift Before Christmas" with all those present in the Sanctuary. The children shared their musical talent as they retold the Christmas story. The children were under the direction of Mrs. Kim Ferguson and Mrs. Betsy Pinder. 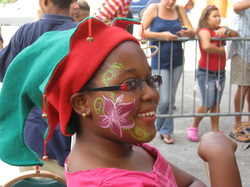 On Saturday, December 6, 2014, the Ebenezer Annual Christmas Fair was held. The first Saturday has traditionally been set aside for Ebenezer to showcase a wide variety of food, sweets, plants, crafts, homemade ice cream and a wide variety of food including conch salad, conch fritters, home cookery, hamburgers. This year we had the bouncing castle and a daiquiri stall led by the youth department. The Creative Treasures stall once again displayed beautiful art done by Ebenezer members. 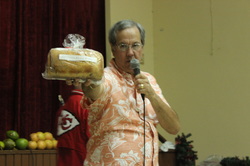 On Monday evening, November 17, 2014, Ebenezer shared in a fellowship meal - the annual Salad Supper at 6:30pm at the Sir Duward Knowles Auditorium. Afterwards, the funny and whimsical Andrew Malone entertained the crowd as he encouraged individuals to outbid each other for the delighful treats that were being auctioned. It was a very successful evening that was enjoyed by all present.

MUSICIANS HONOURED FOR SERVICE IN MUSIC
﻿ 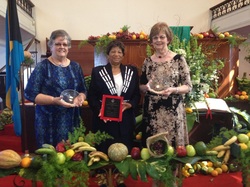 On Sunday, November 16, 2014, Ebenezer honoured three ladies that have given outstanding service in the area of music. This month marks 50 years that Greta Pinder has served as a member of the Sanctuary Choir, Kathleen Albury has served as a musician, playing the organ and Piano and Zala Johnson has served over 50 years as a member of the Sanctuary Choir. each was awarded a plaque as a token of appreciation for the years of consistent service to God.